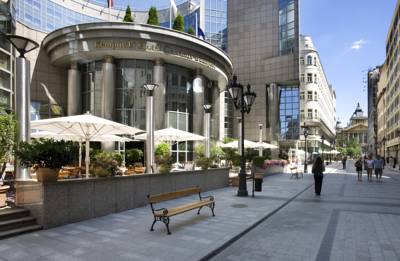 During my visit to the most beautiful city of the Danube, I stayed in a wonderful hotel in the centre of Pest, the Kempinski Corvinus, only a few steps from the Fashion street and the Vaci Utca street, with the Hard Rock Budapest and the stores of the main international brands.
Built in the very heart of and alongside the city’s monarchical best, Kempinski Hotel Corvinus Budapest opened in 11 September 1992, adding bold modernity to downtown Budapest. The site of Kempinski Hotel was home to a residential building until a bomb in WWII destroyed it. It was used as a parking lot for the subsequent 40-plus years- during Hungary’s transition to a free-market democracy.
Aware and respectful of historical Pest, its four facades mirror and re-interpret the fabric of the city. From the inside out, it has re-defined the luxury hotel business.
The recently reconstructed and revamped ground floor creates not just an inspired design statement, but it also embodies the very essence of the Kempinski experience, focused on the four pillars of its ethos: beauty, gourmet, culture and savoir-vivre. The new Kempinski Hotel Corvinus and its Gastronomic Quarter Downtown Budapest is the city’s lifestyle hub with its lounges and terraces extending onto the pedestrianised Fashion Street.
Between 2001-2003, Kempinski Hotel undergoes a comprehensive refurbishment of all its 349 rooms and suites. In 2005 the Asian-accented Kempinski SPA opens on the second level, 5 years later, the hotel becomes home of the first Nobu Restaurant in central Europe and hosts a corporate collection of Hungarian modern works of art that adorn the common areas and rooms.
At the entrance of the Kempinski Hotel Corvinus, I was overwhelmed by the light of the recently reconstructed lobby, designed by London-based MKV, with its soaring nine-metre-high glazed ceiling and two polished-plaster columns made that glimmer in the daylight and light up at night. A modern interpretation of the conventional grand staircase, constructed in an elegant brown stone against a glazed-over Crystalux wall with a decorative and perforated metal balustrade reminiscent of Budapest’s Art Nouveau styling.
After having been captured by the magnificence of the lobby, exploring the interior of Corvinus, there is a decidedly chic and welcoming lounge, the Promenade. The Promenade’s salient feature is a play of light: the space and atmosphere change in dramatic contrast between morning, when the Promenade has the quality of a conservatory natural sunlight that shines through the atrium’s glazed roof, and the evening, when the space becomes full of mood and the ground level’s dramatic design reveals itself to fantastic effect.
In the Living Room Guests can ease into comfortable sofas and high-back armchairs outfitted in warm brown and beige hues, read books and relax near the fireplace.
During my (unfortunately!) short visit to the Hungarian jewel, I stayed in a superior room, even if I would have liked to stay in the The Royal Suite, a room designed in Versace style and characterized by Renaissance-inspired furnishings. Anyway it was on three top floor location also com­mands sprawling views of Budapest were outfitted in comforting “New Empire” style in hues of beige and turquoise. The bathrooms feature marble fittings on the floor and walls. The finest fabric were sourced from Turkey, Belgium and Austria, along with glass mosaics from Italy. 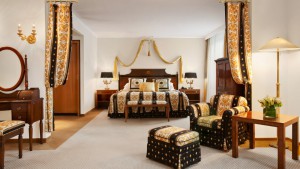 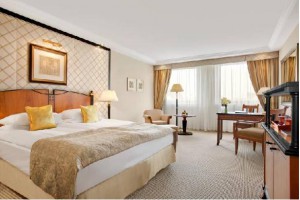